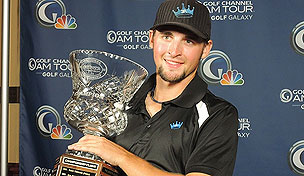 Getty Images
LA QUINTA, CA - JANUARY 22: Ryan Moore watches his second shot on the seventh hole on the Palmer Private Course at PGA West during the second round of the Bob Hope Chrysler Classic on January 22, 2009 in La Quinta, California. (Photo by Stephen Dunn/Getty Images)  -

PONTE VEDRA BEACH, Fla. – As you might expect, the winner of the Championship flight in the Golf Channel Am Tour National Champions is pretty serious about his golf. That would be an understatement for 22-year-old Brian Beach,  who fired a final-round 74 to finish at 4-over-par 290.

Beach, who moved from Montana to Palm Desert, Calif., recently to hone his golf game, closed out the win on the Ocean Course at Ponte Vedra Inn & Club much the way he played all four days. His worst score was his final round, but only by a shot over the two 73s he shot the first two rounds.

After a slow start on Thursday, Beach said his caddie, 'who was phenomenal,' helped him steady the ship.

'I just grinded it out, par after par,' said Beach, whose supportive dad, Scott Beach, walked all four days with him. 'My caddie really kept me loose and kept my mind focused.'

Beach, who graduated from the Professional Golfers Career College in Temecula, Calif., would like to try his luck at professional golf. Having won seven times on the Golf Channel Am Tour this year, he intends to try his hand at tour school this fall, and says the Golf Channel Am Tour, especially the Championship, has been great preparation. This was the first time that he played in a four-round event.

'I enjoyed every moment out here,' Beach said. 'It's been a great learning experience.'

While it never really came down to one shot, Beach did have his pursuers. Paxton Song of Los Altos, Calif., and Paul Erdman of Erie, Colo., finished second, four shots back at 8 over par.

Charles Rougeau of Austin, Texas, was fourth (plus-12) and Jeffrey Perkins of Glen Burnie, Md., finished at 13 over for sixth place.

Former major league baseball player Mark Mulder turned in a 72 on Thursday to finish in seventh place at 15 over.