Beljan: 'I've got to keep pinching myself' 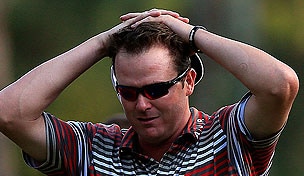 The best email Charlie Beljan has ever opened arrived on Monday morning. It was from the PGA Tour.

Congratulations on your win. We are withdrawing you from final stage of Q-School. … And we’re also going to go ahead and refund your entry fee.

“Man, I’ve got to keep pinching myself because I don’t want to wake up,” Beljan said Tuesday on Golf Channel’s “Morning Drive,” breaking into a wide smile.

From the hospital bed to the winner’s circle, Beljan’s fairy-tale week at the season-ending Children’s Miracle Network Hospitals Classic seemingly grows more unbelievable by the day as more details emerge.

During that second-round 64 – when he struggled with shortness of breath, numbness in his arms and a spiked heart rate – Beljan was so out of it, he apparently asked his caddie on 15 tee: “Are we going to make the cut?”

At the time, he was 9 under for the day and staked to a four-shot lead.

“It was probably the scariest day of my life,” he said.

Once again, Beljan described the episode as a “panic attack that spiraled out of control,” and never did anyone close to him suggest that he withdraw from the event and fly back home to Arizona.

“Shoot,” he said, “it was Saturday on the PGA Tour. I had a two-shot lead, and I’m not missing that chance.”

The rest is now a part of tournament lore.

The best news – save, of course, for not needing to compete in Q-School’s final stage – is that he finally can tee it up in the Waste Management Phoenix Open, an event to which he has written sponsor letters, pleading for an invite, for the better part of the past decade.

The atmosphere on the famed par-3 16th hole at TPC Scottsdale “is unlike anything in golf,” Beljan said. “So we’ll probably throw another pair of golf pants in the bag, just in case something funky happens.”