Beljan out of AT&T National after missing tee time 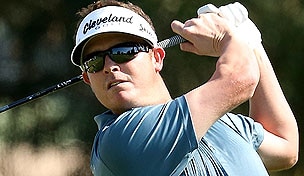 BETHESDA, Md. – On Thursday, Charlie Beljan carded a triple bogey, two doubles and six bogeys in posting a 13-over 84, last place of all players who finished the AT&T National opening round.

On Friday, he was out of the tournament after failing to show for his tee time.

The initial ruling was disqualification, but Beljan maintained he made multiple phone calls to the tournament rules committee to withdraw before the round. The Tour eventually changed his DQ to a WD.

He is currently dealing with an elbow injury.

Beljan was scheduled to begin his second round at 7:16 a.m. ET alongside Robert Garrigus and Aaron Baddeley.

Last year, he received worldwide acclaim when he suffered through panic attacks during the Children's Miracle Network Classic, then won for his first career title.