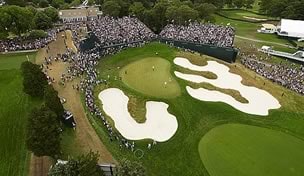 A decision rumored for weeks became official Tuesday: the 2019 PGA Championship and 2024 Ryder Cup are headed to Bethpage Black.

One of five courses at Bethpage State Park in Farmingdale, N.Y., the Black Course became the first public venue to host the U.S. Open when it did so in 2002, with Tiger Woods claiming the trophy for the second time in his career. The season's second major also returned to Bethpage in 2009, when Lucas Glover took home his maiden major title amid soggy conditions. Reigning British Open champion Phil Mickelson finished runner-up on both occasions.

'This is the culmination of a three-and-a-half year effort,' noted PGA president Ted Bishop.

Having twiced served as the venue for the USGA's biggest championship, Bethpage will now host each of the PGA of America's two marquee events. Executives from the organization were on-site in Farmingdale Tuesday to make the announcement, giving the next available date for both the season's final major and the biennial match-play competition between the U.S. and Europe to the Black Course in one fell swoop.

'As a native New Yorker ... who literally has played this golf course well over 100 times, this is a special day for me, and a dream come true,' added Pete Bevacqua, CEO of the PGA of America.

Future sites for the PGA Championship include Valhalla Golf Club (2014), Whistling Straits (2015), Baltusrol Golf Club (2016), Quail Hollow Club (2017) and Bellerive Country Club (2018). The 2016 Ryder Cup will be hosted by Hazeltine National Golf Club, the 2018 version at Le Golf National in Paris, France, and Whistling Straits will be the venue for the matches in 2020. The 2022 site has not been announced.