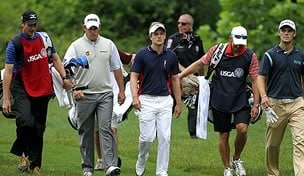 BETHESDA, Md. – It was the marquee three-ball in name only. Those who braved a light drizzle and arrived early at Congressional on Thursday to get a glimpse of the game’s three best got . . . well, a combined card of 10 over par and little to cheer about.

“None of us played particularly well and probably got what we deserved,” said Lee Westwood, the highball in Thursday’s clash of the world Nos. 1, 2 and 3.

Despite birdies at his first two holes of the day (Nos. 10-11), Donald missed more fairways than he hit and turned in 39; while neither Kaymer nor Westwood ever found any rhythm.