Biggest falls down leaderboard, OWGR in 2013 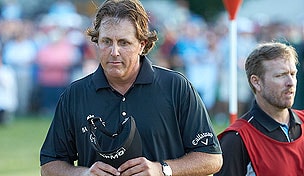 The temperatures are dropping, the leaves are falling and the 2013 Tour season is officially in the books. As we welcome in the fall season, we reflect on some of golf's biggest slips this year.

We dubbed 2012 the 'Year of the Meltdown' because it seemed like everywhere we looked, someone was floundering on a Sunday. Thankfully, 2013 didn't come close to comparing, but that doesn't mean the year was void of stumbles, falls and faltering on golf's biggest stages.

Whether it was an over-par round on a Sunday, getting outright out-played, or a tumble in the world rankings, here's a look at the worst falls from the top in 2013.