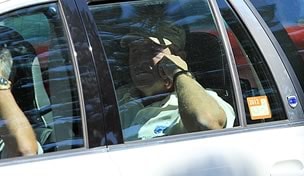 After pumping seven balls into the water guarding The Lakes' 11th hole at the Australian Open last month, John Daly withdrew from the tournament in a huff.

The display drew the ire of Golf Australia, as well as the Australian PGA, which withdrew its invitation to Daly to compete in the Aussie PGA Championship in Coolum. Officials with both bodies expected disciplinary action to be taken against Daly.

At this week's Thailand Golf Championship, however, the two-time major winner denied any such sanctions had been levied.

'I haven't really talked to anybody and they haven't talked to me,' Daly said Tuesday.

Australian PGA chief executive Brian Thorburn said on Friday, however, that action had been taken against Daly.

'John is fully aware that the sanctioning committee has made its ruling,' Thorburn said, according to the Hearld-Sun. 'By convention, we don't publicly release any details ... but it has definitely been imposed. It's disappointing to hear John say otherwise, but it's tough to know the context in which he spoke. But any inference we haven't done anything is totally wrong.'