Bombs of the Week: Frys.com Open 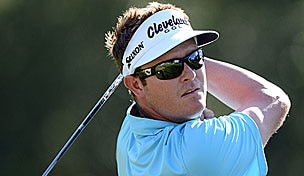 Getty Images
LUMBRES, FRANCE - JUNE 17: Charlie Ford of England in action during Round One of the Saint-Omer Open at The Aa St Omer Golf Club on June 17, 2010 in Lumbres, France. (Photo by Christopher Lee/Getty Images)  -

Each week, GolfChannel.com will take a detailed look at the players who pounded the farthest and fastest drives on the PGA Tour. Here are the four most important distance-related stats from the Frys.com Open, won by Jimmy Walker:

The season-opening blast was helped largely by a few hops along the cart path at CordeValle. In fact, Knox averaged only 294.8 yards per pop off the tee at the Frys, good for 68th on Tour. The Scot tied for 26th in the opener.

Kokrak was in the hunt at the Frys until a final-round 73 dropped him to a share of 12th. He is the early leader for driving distance, at 331.5 yards per drive.

New season, same leader in this category. The big hitter finished T-46 at CordeValle, but he continued to showcase his long-driving skills. Last year he was first on Tour in clubhead speed, averaging 124.45 mph.

No surprise, Beljan was also tops in the category. He was second on Tour in ball speed during the 2013 season, averaging 182.26 mph.