Bombs of the Week: Las Vegas 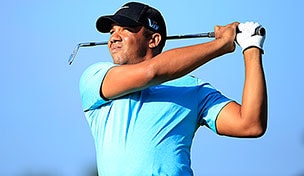 Each week, GolfChannel.com will take a detailed look at the players who pounded the farthest and fastest drives on the PGA Tour. Here are the four most important distance-related stats from the Shriners Hospitals for Children Open, won by Webb Simpson:

Interestingly, Garrigus was only a tenth of a yard longer than last week’s leader, but it likely won’t be the only time that the big hitter tops this category in the wraparound season. Garrigus was T-23 in Vegas.

This is an encouraging sign for Vegas, who was making just his second PGA Tour start since February after undergoing shoulder surgery. This shows that he’s able to give it a full rip again with the big stick. He tied for 40th at TPC Summerlin.

No surprise, Vegas also topped this statistic as well, and he was more than 1 mph faster than last week’s leader, Charlie Beljan, who was a fixture in this statistic all season in 2013.