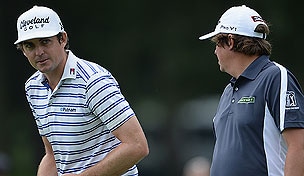 Getty Images
KAPOLEI, HI - APRIL 18: Kathleen Ekey hits a shot during the first round of the LPGA LOTTE Championship Presented by J Golf at the Ko Olina Golf Club on April 18, 2012 in Kapolei, Hawaii. (Photo by Jeff Gross/Getty Images)  -

ATLANTA – From 170 yards at the par-4 seventh hole, Keegan Bradley’s approach bounced once and hopped into the cup for an eagle at the Tour Championship. What happened next, however, was even more riveting.

There was no celebration, no high-fives. Instead, Bradley sat down in the fairway, legs extended, hands at his side and a blank look fixed on his face, “Dufnering” style. His playing partner on Day 4, Jason Dufner who sparked the social media sensation earlier this year, was not amused.

“I was pissed because he holed out and he went past me on the leaderboard and took a 2-up advantage in total hole-outs (on the PGA Tour in 2013),” Dufner said. “It was pretty lucky the hole-out shot like that from the fairway.”

Bradley said he’d been wanting to break out his “Dufnering” skills for some time but needed the right moment.

“I thought, if I get the chance to do it, I'm going to do it. I didn't expect to make that shot,” said Bradley, who carded a 67 and tied for 12th at East Lake. “I told Duff, I don't care what happens. It was the highlight of the year for me.”