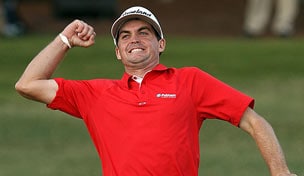 Getty Images
MELBOURNE, AUSTRALIA - MARCH 13: He-Yong Choi of Korea plays out of a bunker during day three of the Women's Australian Open at The Commonwealth Golf Club on March 13, 2010 in Melbourne, Australia. (Photo by Scott Barbour/Getty Images)  -

Despite being a major champion and a two-time winner in his rookie season, Keegan Bradley hopes to maintain the same mind-set which carried him through last year.

'I still need to have that mentality that I had last year of trying to keep my card, trying to be a rookie and have that chip on my shoulder,' Bradley said Wednesday at the Hyundai Tournament of Champions. 'The moment you relax a little bit I think is when you don't play as well.'

Bradley views complacency as a threat to his development as a world-class player.

'I think that what happens sometimes is players get comfortable,' he said.

'I swear to you, still in the back of my mind, I still think I've got a lot to prove, a lot to play for. Some days I forget what I've done, and then I realize that I'm only a second-year player on tour.'

For a second act, Bradley hopes to be on the leaderboard more often.

With his increased notoriety comes larger expectations and larger scrutiny, including of the belly putter he wields. Bradley hopes it dissipates.

'I hate when people think that the belly putter is a crutch for us to putt with. For me it's just a better way to putt. I always considered myself a good putter before I had a belly putter. I just putted better with a belly,' he said.

'I hate the negative press it gets because it's not some magic thing that you grab and you can just the first week out you win. It takes hours and hours of practice, and I hope people realize that.'