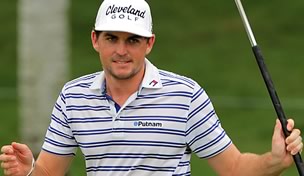 Keegan Bradley used a second-nine surge to grab the lead through two rounds of the CIMB Classic in Malaysia. After starting on the back nine, and turning in 1 under, Bradley shot 5-under 31 on his inward half. His second-round 66, after opening in 65, put him four shots clear of Ryan Moore, who followed his first-round 63 with an even-par 70.

What it means:  After winning twice in his rookie season of 2011 and once in his sophomore season, Bradley went 0-fer in 2013 (the Tour season, at least). He has a chance to get back into the winner’s circle during the wraparound season and creep closer to his career-best world ranking, which is 10th. He’s currently 15th.

Round of the day: Bradley’s 66. He was battling Moore for the lead early in his round, but after Moore posted at 9 under, Bradley raced past him. Bradley birdied Nos. 2, 3, 5, 6 and 7. It’s the first time in his Tour career that he’s shot 66 or lower in consecutive rounds.

Best of the rest: Leishman’s 7-under 65. The Aussie hasn’t had a top-10 since The Players, and he didn’t get off to a great start this week (even-par 72). But he moved up 25 spots Friday in the limited field and is now T-5. His only Tour victory came in the 2012 Travelers.

Biggest disappointment:  Moore. After making 10 birdies in Round 1, Moore made only three in the second round, along with three bogeys for an even-par round. He went from two up at the start of play to four down.

Main storyline heading into Day 3: Which direction will Bradley head on Moving Day? Since an 83 in the third round of this year’s Masters, Bradley has only shot in the 60s twice in 11 Saturday tries.

Quote of the day: “It was closer today; the rhythm was a little bit better. Technically I’ve got a lot of issues. I’ll address it more in the offseason. This week and next week are going to be difficult.” – Phil Mickelson, who shot 70 to reach 3 under, one day after saying his swing was “terrible.”