Breaking down the LPGA trophy races 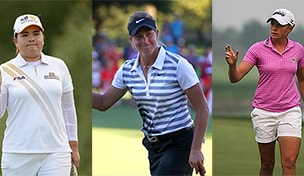 There’s a lot at stake going into the final two events of the LPGA season.

With the top three players in the Rolex Women’s World Rankings in this week’s field at the Lorena Ochoa Invitational, season-ending trophies and honors hang in the balance.

Rolex Player of the Year: Inbee Park has a comfortable lead, with Suzann Pettersen the only player who can catch her. Unlike the PGA Tour, this isn’t decided by a vote. Park leads the POY points race with 290. Pettersen is second at 252. A victory is worth 30 points in both the Lorena Ochoa Invitational and the season-ending CME Group Titleholders with second place worth 12 points, third worth nine and points awarded down to 10th place.

Pettersen must win one of the final two events and finish at least tied for third in the other to have a chance to pass Park, but that’s if Park doesn’t score a single point.

Rolex world No. 1 ranking: Pettersen has a chance to overtake Park this week as the new No. 1. It’s remarkable given the record-setting season Park has enjoyed.

While projections can’t be determined definitively until this week’s strength of field is finalized with the start of play, Pettersen has a chance to take the No. 1 ranking with a victory and possibly even a second-place finish this week, depending on what Park does and how the strength of field ends up.

Money title – Park, who won the money title a year ago, leads in earnings again this season with Pettersen close behind her. Stacy Lewis is a long-shot but still mathematically within reach of winning the money title.

There is a $150,000 first-place check up for grabs at the Lorena Invitational and a $500,000 winner’s check at stake at the Titleholders next week.

Here are the current money leaders:

Vare Trophy – Lewis leads the tour with the lowest scoring average, but Pettersen and Park are both within striking distance to take the trophy:

Louise Suggs Rolex Rookie of the Year – Germany’s Caroline Masson leads a very tight competition. It’s a three-woman race with none of the top contenders in this week’s field at the Lorena Ochoa Invitational but all three scheduled to play the season finale. With 150 points up for grabs to the winner at the Titleholders, the top three all have a chance to take the honor.