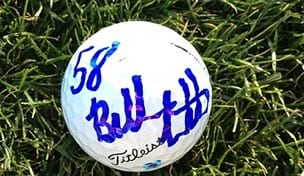 Getty Images
An image Bubba Watson tweeted of the ball with which he shot 58.  -

Bubba Watson recently tweeted that he had 10 days to prep for the 2012 PGA Tour season. On Thursday, he tweeted a practice round score which might indicate he is ready.

Watson said he shot 58 from the gold tees at his home course at Estancia Club in Scottsdale, Ariz.

According to Estancia head professional Terry Carlson, it was shot as part of the club's Black Rock Game, held every Tuesday and Thursday.

Watson tweeted pictures of the final putt, the golf ball and the updated record at the course (Click here to view gallery).

Among many well-wishers, music heart throb Justin Bieber congratulated Watson on the round, saying, 'Atta boy @bubbawatson shooting a 58!!! What a beast.'