Bubba Watson to be guest picker on College Gameday 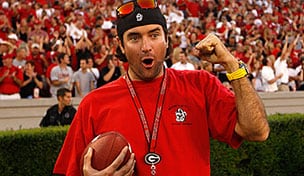 Getty Images
LA QUINTA, CA - JANUARY 21: Former President Bill Clinton, right, gives a hug to Greg Norman of Australia before teeing off at the Palmer Private Course at the PGA West during the third round of the Humana Challenge in partnership with the Clinton Foundation golf tournament January 21, 2012 in La Quinta, California. (Photo by Denis Poroy/Getty Images)  -

ESPN's 'College Gameday' is rolling into Athens, Ga., this week for Georgia vs. LSU, and a popular Bulldog favorite will help pick the games on Saturday.

Bubba Watson, who helped the Bulldogs win the SEC championship in 2000, will join hosts Chris Fowler, Lee Corso and Kirk Herbstreit on the set to pick this week's college football games. It's probably not hard to guess which way the 2012 Masters champion is leaning.

Watson has been seen on ESPN quite a bit in the last month. He filmed a commercial at the ESPN headquarters (below), and he was also part of a new SportsCenter commercial with several other athletes.