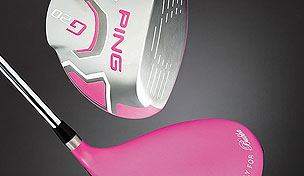 Bubba Watson rivals Aerosmith for his love of pink, and his appreciation for the color will be a centerpiece in a season-long charitable effort for the world No. 21.

Watson unveiled the campaign, dubbed Bubba and Friends Drive to a Million, on Tuesday at the Farmers Insurance Open and on his website.

Watson will play this season with a Ping G20 driver with a pink head and shaft, aiming to raise in upwards of $1 million for charity. The club maker will donate $300 for the first 300 drives measuring 300 or more yards in 2012. Last season, Watson had 483 drives greater than 300 yards.

Ping contributed $10,000 to start the effort. In total, Ping could provide 10 percent of Watson's goal.