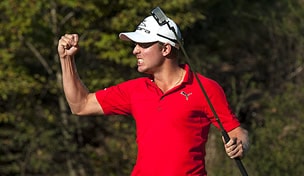 Getty Images
LAS VEGAS - OCTOBER 17: Rory Sabatini blasts out of the greenside bunker on the 9th hole during the second round of the Justin Timberlake Shriners Hospitals for Children Open held at the TPC Summerlin on Friday, October 17, 2008 in Las Vegas, Nevada. (Photo by Marc Feldman/Getty Images)  -

LAKE BUENA VISTA, Fla. – The Children’s Miracle Network Hospitals Classic was the final event for PGA Tour players to improve their position on the money list. In the final installment of Bubble Watch, GTC tracks the day’s winners and losers in the annual cash crunch.

Jonas Blixt (34th on the money list, started the week 35th). Although the Swede came up short in his bid to take his first trip down Magnolia Lane he gave it a good run. All four rounds were under par and he was 3 under for the day through 10 holes on Sunday before a pedestrian finish dropped him into a tie for 19th.

Brendon De Jonge (39th, started the week 39th). The Zimbabwe native had one of the year’s most consistent seasons but he bogeyed two of his final four holes at Disney to end his Masters run.

Top 70 (exempt into all 2013 invitational tournaments)

Charlie Beljan. (63rd, started the week 139th). The Disney champion wasn’t thinking about the top 70 when he completed his emotional week but he will next year when he tees it up at some of the year’s best events.

Tim Herron (124th, started the week 136th). Despite a watery double-bogey 6 at the penultimate hole on Sunday, Lumpy’s tie for ninth was enough to lift him into the top 125 for just the second time in five years

Camilo Villegas (144th, started the week at 150th). Started the week on the number but thanks to an opening 65 finished tied for 28th to avoid second stage.

Billy Hurley III (151st, started the week 146th). Missed the cut with rounds of 74-76 to drop out of the top 150 and now heads to the second stage of Q-School this week at Southern Hills in nearby Brooksville, Fla.