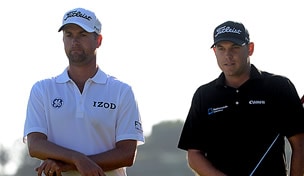 DUBLIN, Ohio – Bill Haas and Webb Simpson missed each other during their Wake Forest days – Haas graduated in 2004; Simpson entered the school later that fall – but they’ll be together on Day 1 at the Presidents Cup.

The two friends will compete in the second fourballs match of the day against Adam Scott and Hideki Matsuyama, fulfilling a long-stated goal.

“We both were on the team in Melbourne and didn't get to play together because he and Bubba [Watson] played so well together,” Haas explained. “They came out of the gate and played so good, and I think I had thought that would happen in Melbourne, and then it didn't get to. So I think for two years now that was one of our goals.

“We talked about we'd love to get in this thing again, Ryder Cup or one of these, and play together. We're excited no matter what happens. It's something we're going to remember 50 years from now. Tomorrow is going to be a fun day, for sure.”

When Simpson was named to the team as a captain’s pick, he told Fred Couples that he’d love to play with Haas.

“Bill is a great friend,” Simpson said. “We played a lot of practice rounds together and obviously we went to Wake. I didn't play with him, but he was kind of my big brother when I got on Tour, really wanted to help me out in whatever I needed so I've learned a lot from him.

“I just thought it would be a great fit. You want to play with a guy that you kind of jibe with and get along with for the most part. Sometimes there's situations where you've got to play with somebody, depending on the team but I think we get along great as teammates. So I'm looking forward to it.”