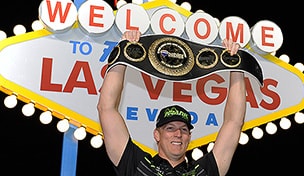 Getty Images
Brendan Steele makes an approach shot on the eight hole during round two of the Frys.com Open at the CordeValle Golf Club on October 11, 2013 in San Martin, California. (Photo by Robert Laberge/Getty Images)  -

Tim Burke won the Re/Max World Long Drive Championship Wednesday night in Las Vegas, thanks to a 427-yard shot in the final round.

Burke, a 26-year-old from Orlando, Fla., defeated 2010 champion Joe Miller of England for the $250,000 winner-take-all prize. The event took place under the lights at Las Vegas Motor Speedway, with a total of eight contestants hitting from a custom-made platform built into the grandstands, onto a yardage grid on the racetrack infield below.

In the championship match, each player was allowed six total drives. Miller went first, hitting three shots and setting a mark of 381 yards. Burke topped him with one of 405 yards.

In his final three drives, Miller matched Burke’s 405 number, but was ultimately bettered by a Burke’s 427-yard bash – a finals tournament record.

“That was the longest ball I think I ever hit under this kind of pressure,” said Burke, who was runner-up in this event last year. “This was the best time and the biggest moment of my life, and I’m thankful to be able to come here and get the job done.”

Burke was a standout pitcher for the University of Miami, where he appeared in two College World Series. He works as a financial wholesaler for CNL Securities Corp. The Re/Max World Long Drive Championship has been contested every year since 1975.