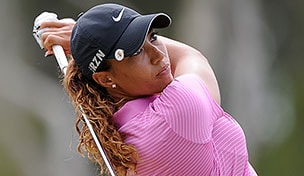 Getty Images
Dennis Walters' gavel-wood has a 3-wood loft on one side, a driver loft on the other.  -

Two days removed from her breakthrough win in Australia, Cheyenne Woods is still trying to take it all in.

"It's been overwhelming this past week, a lot of media attention even being in Australia," Woods explained during an interview Tuesday with "Morning Drive." "This is something I've always dreamed of, winning on the professional level, so I'm really happy."

The 23-year-old took Royal Pines Resort by storm last week, holding off a hard-charging Minjee Lee to capture her first professional win on a major tour at the Australian Ladies Masters. Woods noted that down the stretch, she relied on her past success at other levels of golf for confidence.

"I've been able to win at junior golf, collegiately and now professionally," noted Woods, who played at Wake Forest University. "I think this past week I really drew from my past wins."

Tuesday, Woods also cited another source of inspiration - her grandfather Earl Woods, who passed away in 2006 but whose son Tiger has transformed the game over the past two decades.

"I still remember how much he believed in me, and I think that's what keeps me going and what keeps me fighting to follow my dream and keep getting better and better, because I knew my grandfather had this belief in me and knew I was capable of doing it," she explained. "He saw a talent in me that maybe at the time I didn't see."

While Woods may receive extra media attention because of sharing a last name with a certain 14-time major champion, she added that her support system of coaches and former teammates has helped her to remain grounded and focused on the task at hand during her rise to the professional ranks.

"I go out on the course knowing who I am, what my game is," said Woods. "I don't fall back on what other people might be thinking or expecting of me."

Still halfway around the world, Woods has not been able to get in touch with Uncle Tiger, who sent a tweet Sunday congratulating her on the victory. The younger Woods is now refocusing on her next event, though, with the hopes of continuing her momentum this week at the Australian Ladies Open in Victoria.

"It's been really hectic trying to get in touch with anybody back home," she added. "I'm just getting ready for this next week and hopefully it will go well and I'll have another congratulatory tweet or text."