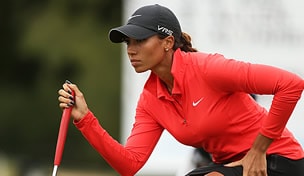 Getty Images
Paul McGinley of Northern Ireland speaks to the audience the European Tour Players' Awards ahead of the BMW PGA Championship at the Sofitel London Heathrow on May 19, 2015 in London, England. (Photo by Andrew Redington/Getty Images)  -

Cheyenne Woods put on a show Friday at the Australian Ladies Masters to seize a share of the lead with some spectacular shot-making that would have made her famous uncle proud.

At 10-under 136, Woods is tied for the lead with South Africa’s Stacy Lee Bregman (67) halfway through the event. She’s seeking her first Ladies European Tour title in her second season on that tour.

As niece to Tiger Woods, Cheyenne created a buzz Down Under with her rise on the leaderboard. After Friday’s round, she was asked by Australian media about what it has been like following her uncle into the game.

“I knew I hit it really well,” Woods said. “I knew it was the right club, good distance. I saw it land, and then I looked away, and they said it went in. So, it was exciting.”

The Woods family resemblance is strong in Cheyenne’s face. She is the daughter of Earl Woods Jr., the oldest son to Earl Woods Sr., Tiger’s late father. Earl Woods Jr. was among three children born in Earl Sr.’s first marriage.

Cheyenne’s eyes and smile bear striking resemblance to Tiger's. After Cheyenne graduated from Wake Forest and turned pro in 2012, LPGA star Suzann Pettersen joked that she hoped the similarities did not run deeper.

“If she has the genes of the rest of the family, I think we should be a bit worried,” Pettersen said.

Cheyenne, 23, and Tiger, 38, do share a certain history to their games. Cheyenne first picked up a golf club when she was little more than a toddler in Earl Woods Sr.’s garage, the same garage where Tiger got his start. Cheyenne’s career, of course, hasn’t skyrocketed the way Tiger’s did.

Cheyenne won the Atlantic Coast Conference title by seven shots while at Wake Forest. After turning pro, she won a Sun Coast women’s mini-tour event, but she has struggled in her bid to play the LPGA. She failed to advance through LPGA Q-School qualifying the last two years. She did qualify for the LET last year, ending her rookie season 78th on the Order of Merit. She led after the first-round at the Spanish Open last year, opening with a 64 before following it up with a 78. This week marks the second time she’s held or shared the lead after any round in an LET event.

Woods said she does look at leaderboards as she plays.

“I love seeing my name on there,” she said.

Though ESPNs Rick Reilly wrote a scathing report before the Masters last year that Tiger has not had any contact with his siblings since Earl Sr. died seven years ago, Cheyenne reports a good relationship with her uncle.

“We talk here and there,” Cheyenne said. “We are both extremely busy. Last time I talked to him was, maybe, a few months ago. I don’t talk to him after every event. I have a swing coach that I collaborate with after every round, so that’s probably where I get most of my on-course instruction. But if I ever needed something, I’ve asked Tiger for advice, here and there, so he’s great to have for that. But pretty much, I’m just out here doing my own thing.”