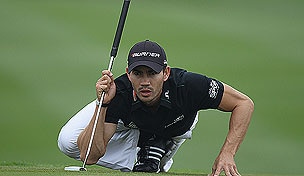 Getty Images
SCOTTSDALE, AZ - FEBRUARY 01: Kenny Perry hits his tee shot on the 11th hole during the final round of the FBR Open on February 1, 2009 at TPC Scottsdale in Scottsdale, Arizona. Perry won in a playoff. (Photo by Stephen Dunn/Getty Images)  -

After taking just 24 putts on Thursday, Camilo Villegas’ putting pose may have to go by the nickname ‘Daddy Longlegs.’

Villegas thrived with his TaylorMade Manta belly putter, shooting 9-under 63 to share the lead at the Humana Challenge with David Toms.

The 30-year-old Colombian made the switch to a belly putter at the CIMB Asia Pacific Classic Malaysia in October. Villegas, however, is no stranger to the belly putter. He has been sporadically practicing with one since 2008, but spent intense time with it before using it in competition.

'I think a lot of guys make a mistake here where they just grab a belly putter, it feels great for 5-10 minutes and they go with it. Then they miss a couple of putts and it goes to your head and they go, ‘Whoa, what’s this? Out.’ So I wanted to put it in play and keep it in play.'