Can Americans continue their win streak? 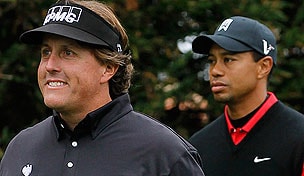 As Phil Mickelson triumphed on Sunday for the 40th time in his PGA Tour career, the United States claimed its sixth consecutive win to start the 2012 season. The streak marks the longest run of American wins to begin a PGA Tour season since 2001, when Yanks took the first eight tournaments of the year.

Continuing that streak this week at Riviera, however, is a bit of a toss-up. Before Aussie Aaron Baddeley won at Hogan’s Alley last year, Americans had won the four prior years. Behind that quartet were four different foreign-born winners.

Extending the streak to match the ’01 start is an even tougher task. An American – Tiger Woods in 2008 – has won just one WGC Match Play title in the last six years.

The chances look even worse considering just 24 Americans made the cutoff to get into the event and 23 will play, as Phil Mickelson will skip the event. It is an increase from an all-time low of 17 Americans in the 2009 field, but well off the high of 40 in the first year of the event in 1999.

Even if Americans could get to eight in a row, the streak would be well shy of the longest run in this century. From the 2006 Open Championship to Disney, Americans reeled off 17 straight wins in PGA Tour events.

Given the thumping Americans received in the Ryder Cup that year, any prolonged run of American success may not say much about what to expect at Medinah in the fall.