Can Americans win two out of three on the LPGA? 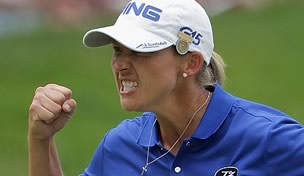 Americans Angela Stanford and Katie Futcher are two of the three players tied for the 54-hole lead at the HSBC Women’s Champions in Singapore. Stanford, Futcher and Jenny Shin are all on 9 under and two clear of Shanshan Feng.

The Americans are the only two countrymen in the top ten but, if either pulls off the victory on Sunday, that would mean two U.S. wins in the first three events. With Jessica Korda taking the newly-sanctioned ISPS Handa Women’s Australian Open, a pair of official American wins in the first three of the LPGA season would be a first on the tour since 2007.

The U.S. took the first three events that year, with Paula Creamer and Stacy Prammanasudh taking the Hawaiian double. Meaghan Francella then won in Mexico. Five different Americans won in the opening six events. Lorena Ochoa was the only non-American winner.

Prior to 2007, Kelly Robbins and current Solheim Cup captain Meg Mallon led off the 1999 season with U.S. wins.

Even with an American win, however, a nearly four-year American drought on the LPGA Tour will persist. The last time Americans won consecutive official events was in the late summer of 2008, when Cristie Kerr won the Safeway Classic and Stanford taking the Bell Micro LPGA Classic.