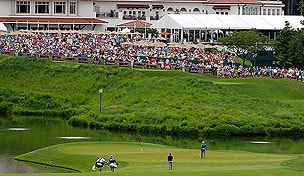 BETHESDA, Md. – Graeme McDowell, who now famously guaranteed the winning score would be over par, is disappointed with the way Congressional played. Imagine how the U.S. Golf Association feels.

An imperfect storm of hot and dry conditions leading up to the national championship and a series of showers during the tournament have left the Blue Course exposed to historically low scoring.

Rory McIlroy’s 199 total is the lowest 54-hole card in U.S. Open history and he’s the first player to ever reach 14 under par in 111 playings, while Saturday’s 26 sub-par rounds is the most ever in the national championship.

“I don't think we're going to try to trick Mother Nature. This is what we got in 2011. You come to the U.S. Open in the District of Columbia or in Maryland in June, that's the dice you roll, and that's what we got,” said Tom O’Toole, the chairman of the USGA’s championship committee. “We ended up with a soft golf course.”

The USGA has taken its lumps in the past for setting up golf courses that some considered unfair or over the top, Shinnecock Hills in 2004 and the Olympic Club in 1998 are often cited, but since Mike Davis took over course set up in 2006 the trend is for comfort over speed.

“Give credit to the USGA,” David Feherty said. “With Sub-Air they could have sucked all the moisture out of the greens this week and made them un-puttable. It’s a mistake they would have made in a heartbeat before.”