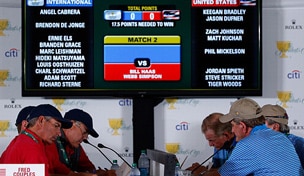 Getty Images
The Big Break travled back to Hawaii where Kim Welch took the title. Watch the full season <a href='http://www.golfchannel.com/tv/big-break-kaanapali/'> HERE </a>  -

DUBLIN, Ohio – Unlike the Ryder Cup, pairings at the Presidents Cup are more of chess match than a conference call.

At the Ryder Cup captains fill out the tee sheet and wait to see how their counterpart played it, making it virtually impossible to manipulate favorable match ups. On Wednesday at Muirfield Vilalge, for example, U.S. Presidents Cup captain Fred Couples deferred the first pick and the game was on.

International captain Nick Price sent out Jason Day and Graham DeLaet in the day’s first four-ball match, the U.S. countered – after a lengthy decision between Couples and his assistant captains Davis Love III and Jay Haas – with Hunter Mahan and Brandt Snedeker.

“That was fun,” said Love, last year’s U.S. Ryder Cup captain. “I asked Freddie when we were done, ‘We get to do this four more times?’”

By comparison, Love said he much preferred the Presidents Cup method over the blind draw of the Ryder Cup.

“You are playing a game. The other way you just write it down and guess and turn it in,” Love said.  “(The Presidents Cup) way you can sit around with your guys and say, ‘OK, who do you want to play?’ It puts a lot more strategy into it.”