Roll Tide: Cauley to play with Saban at Pebble 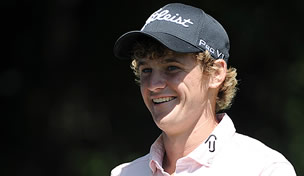 Getty Images
PONTE VEDRA BEACH, FL - MAY 07: Tiger Woods putts on the seventh green in front of a gallery of fans during the second round of THE PLAYERS Championship held at THE PLAYERS Stadium course at TPC Sawgrass on May 7, 2010 in Ponte Vedra Beach, Florida. (Photo by Richard Heathcote/Getty Images)  -

Nick Saban will celebrate Alabama’s recent BCS championship title by teeing it up in the upcoming AT&T Pebble Beach National Pro-Am with a budding star from the same school.

GolfChannel.com has learned that the three-time national title-winning coach will compete in the tournament with PGA Tour rookie Bud Cauley.

Saban is an avid golfer who has been reported to regularly score in the mid-to-high 70s. He hosts his own charity golf tournament in Alabama each summer.

Two years ago, after an animated discussion with quarterback A.J. McCarron that ended with Saban slapping him on the backside, he said, “I’m not apologizing for anything I did, to be honest with you. A.J. doesn’t have a problem with it and nobody else should have a problem with it. … If you don’t like that, then I guess you should go watch the Golf Channel.”