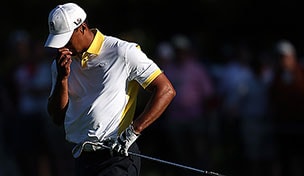 In handing out grades for the 2013 PGA Tour season, Golf Channel analyst Brandel Chamblee saw plenty that he liked: FedEx Cup champion Henrik Stenson received an A+, as did PGA Tour Rookie of the Year Jordan Spieth and major winners Phil Mickelson and Jason Dufner.

In the piece penned for Golf Magazine, though, Chamblee went to the other side of the spectrum when assessing the campaign of world No. 1 Tiger Woods, whom he gave an F.

'He won five times and contended in majors and won the Vardon Trophy,' Chamblee wrote of Woods, but added that the 14-time major champion, 'how shall we say this ... was a little cavalier with the rules.'

Noting that his own attempt to predict winners and scores at various major events yielded only a 50-percent success rate, Chamblee also gave himself an F.

'But,' he added, 'at least I earned this one honestly.'