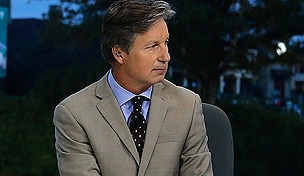 In the show, Chamblee noted that an insinuation of cheating against Woods “went too far” without knowing the player’s intent during his various rules gaffes this year.

“Cheating involves intent,” Chamblee said. “There’s no way that I could know with 100 percent certainty what Tiger’s intent was in any of those situations. That was my mistake.”

Chamblee also resigned from Golf magazine, and his column for the December issue of the publication will serve as his final piece.

In the original Golf.com article, Chamblee gave Woods an ‘F’ grade for his 2013 campaign, noting that while the 37-year-old won five times, he “was a little cavalier with the rules.” Chamblee went on to compare Woods’ season with an incident he experienced in grade school when a teacher caught him cheating on a test.

The rules incidents cited in the article included Woods’ penalties for illegal drops at the Abu Dhabi HSBC Golf Championship and the Masters, a two-shot penalty for moving his ball at the BMW Championship and questions surrounding a drop during the final round of The Players Championship.

Chamblee noted that a recent discussion with his son helped him to better understand where his comments erred.

“He said, ‘Dad, if you’d been more diplomatic in what you wrote, perhaps people would be talking more about the issue than your assessment,’” Chamblee explained. “He’s a smart kid, and it wasn’t until after he said that that I offered my apology on Twitter.”

Chamblee’s comments last week on Twitter included an apology to Woods “for this incited discourse.”

“Golf is a gentleman’s game and I’m not proud of this debate,” Chamblee tweeted on Oct. 22. “My intention was to note Tiger’s rules infractions this year, but comparing that to cheating in grade school went too far.”

Though the article appeared on Golf.com, much of the response to the situation was directed at Golf Channel. Woods' agent Mark Steinberg discussed the possibility of legal action while terming Chamblee’s comments “the most deplorable thing I have seen.”

Earlier this week, Woods explained that he is “going forward” from the situation, but that “the ball really is in the court of the Golf Channel and what they are prepared to do.” Rory McIlroy made similar sentiments.

Chamblee took time Wednesday to clarify his roles with both Golf Channel and Golf.com moving forward.

“This column appeared at Golf.com. Nobody here at Golf Channel knew anything about it,” Chamblee said. “All of this has made me realize that there is a conflict and a confusion when you work for one company and write for another company.

“Going forward, I’m not going to be writing for Golf magazine beginning next year,” Chamblee added. “I’ll be writing exclusively for GolfChannel.com and (NBCSports.com). That way, if Tiger and his camp have an issue with something I write, they will at least be yelling at the right people.”