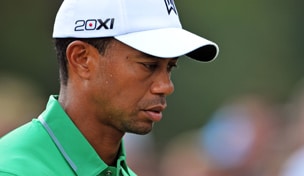 Golf Channel analyst Brandel Chamblee took to Twitter on Tuesday night to apologize to Tiger Woods, saying that the insinuations that the world No. 1 cheated on the course this season “went too far.”

In multiple posts on his Twitter account, which has more than 42,000 followers, Chamblee apologized to Woods for the “incited discourse”.

What brought me here was the realization that my comments inflamed an audience on two sides of an issue.

Golf is a gentleman's game and I'm not proud of this debate. I want to apologize to Tiger for this incited discourse.

And no - I was not asked to apologize

My intention was to note Tiger's rules infractions this year, but comparing that to cheating in grade school went too far.

In an end-of-season report cards column for Golf.com, Chamblee gave Woods, who won five times, an “F” because he was a “little cavalier with the rules.” Earlier Tuesday, Chamblee told the Associated Press that he was standing by his failing grade because “ethics matter more than athletics.”

After the column was initially posted, Woods' agent, Mark Steinberg, told ESPN.com that he would “have to give some thought to legal action.”