Chopra records two aces in one round 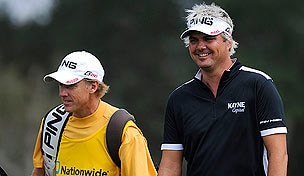 Most golfers go a lifetime without making one hole-in-one, but Daniel Chopra notched two in a practice round at Pebble Beach Golf Links on Monday.

Playing with rookie Richard H. Lee, Chopra aced the postage stamp par-3 seventh hole before recording another 1 at the 17th hole. Chopra used a 50-degree wedge from 104 yards on the seventh, then struck again with a 7-iron from 176 yards at No. 17.

According to a 2010 Golf Digest article, the estimated odds of an amateur making two holes-in-one in a round are one in 64 million. The odds, of course, would be better for a player of Chopra's skill.

Making two aces in a round would be like hitting the lottery for a lot of people but, in fact, it is easier than winning America's biggest lottery. The odds of winning the Powerball jackpot are one in 175,223,510.

Chopra may have wanted to save the aces for the money rounds, but he has been prolific with them in his PGA Tour career. He has a trio of aces in tournament competition in consecutive seasons.

They began in 2007, when Chopra used a 5-iron at TPC Louisiana's 17th hole to make an ace in the final round of the Zurich Classic of New Orleans. In 2008's Bob Hope Classic, Chopra drained an 8-iron from 173 yards at the 14th hole of SilverRock Resort. At the 2009 Barclays, Chopra used a 6-iron at the fourth hole of Liberty National to make a third-round ace.