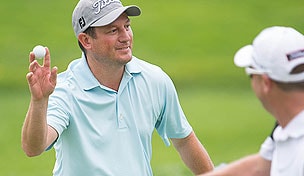 ST. SIMONS ISLAND, Ga. – After blustery conditions for much of the past two days, winds calmed significantly at Sea Island Golf Club for the final round of the McGladrey Classic.

No player took more advantage of the benign conditions than Tim Clark, who carded an 8-under 62 behind an array of accurate iron shots.

“Being five back I had to go out and shoot a good score, and this was one of the calmest days we’ve obviously had,” explained Clark, who tied for second alongside Briny Baird, one shot behind Chris Kirk. “Obviously when you’re playing good on a golf course like this, you can shoot those sort of scores.”

Clark got out of the gates quickly Sunday, recording birdies on five of his first seven holes – all without making a putt longer than nine feet. In total he notched nine birdies on the day, including one on each of his final three holes.

“That’s been one thing that I’ve struggled with,” Clark said of his iron play after reaching 17 of 18 greens in regulation during the final round. “These last few weeks, I found something in my golf swing and I’ve really started to hit it better.”

Having battled injury for much of the past three years, the South African feels optimistic after Sunday’s round netted him his 12th career runner-up finish on the PGA Tour.

“I haven’t played this sort of golf in quite a long time,” added Clark, a former Players champion whose most recent second-place finish came at the 2013 Sony Open in Hawaii. “I’m starting to feel like my game might be back to where it was three years ago.”