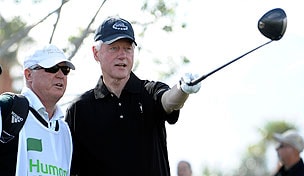 On Wednesday, former President Bill Clinton played in a professional pro-am for the second time in a month. This time, however, Clinton was able to finish his round.

'President Clinton was great. He interacted with us more than we interacted with him – telling jokes and stories, asking about my life and family. He was a great guy. It was such a memorable experience,” said Brigman, according to PGATour.com.

Clinton arrived in Colombia on Tuesday from Nigeria, an 11-hour flight, after attending another Clinton Foundation function over the weekend.

The 42nd President was in Colombia for the golf but primarily in support of his foundation's Clinton Giustra Sustainable Growth Initiative (CGSGI) – a beneficiary of the tournament. Clinton and philanthropist Frank Giustra began the initiative in 2007, developing projects in Colombia, Peru, Mexico and Haiti. In Colombia, the initiative aims to further economic development and improve health outcomes in remote areas.

Clinton had been a part of the Saturday pro-am during last month's Humana Challenge. High winds, however, canceled play for the day after Clinton and partner Greg Norman had only played nine holes.

The Wednesday outing marked the first time an American president competed in a Nationwide Tour event. In 1995, Clinton became the first sitting U.S. President to compete in a pro-am on the PGA Tour, when he played alongside former presidents George H.W. Bush and Gerald Ford in the Bob Hope Classic.

South Africas Brenden Pappas won the Bogota Open on Sunday when lightning wiped out the third round, reducing the Nationwide Tour event to 36 holes.

Steve Pate became the oldest champion in Nationwide Tour history, winning the Bogota Open on Sunday when Aaron Watkins missed a 3-foot par putt on the second hole of a playoff.