Clinton playing alongside Norman at Humana 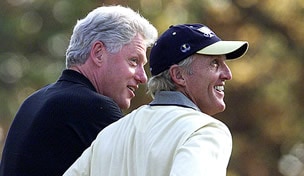 President Bill Clinton will compete in the pro-am portion of the Humana Challenge on Saturday alongside good friend Greg Norman, the PGA Tour confirmed. The group will tee off at 10:20 a.m., local time on the Private Palmer course at PGA West.

This is Clinton’s second start at the former Bob Hope Classic. In 1995, he became the first sitting president to tee it up in a PGA Tour event, doing so with presidents Gerald Ford and George H.W. Bush. Clinton shot 93.

Clinton is one of four ex-presidents to compete in the event, including Dwight Eisenhower.

Scott McCarron will be the other professional in the group. He will play with Humana CEO Mike McCallister.