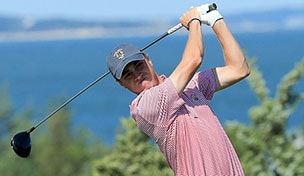 Thomas, the 2012 NCAA Player of the Year from the University of Alabama, is making his PGA Tour professional debut at this week’s Frys.com Open.

“I’m not trying to have too many expectations,” Thomas, who competed in the European Tour's Alfred Dunhill Links as a pro in September, said Wednesday at CordeValle Golf Course. “I just want to come into all my events and just play the best that I can and most importantly, just have a place to play this year.”

Like Spieth this past season, Thomas begins his campaign without any tour status. He will be competing in Q-School to try and earn a card on the Web.com Tour. He’s competing in this week’s event on a sponsor exemption and will do the same at The McGladrey Classic.

The 20-year-old Thomas made three of four cuts in Tour events as an amateur, his best finish a T-30 at this year's Travelers Championship. He made the cut as a 16-year-old at the 2009 Wydham Championship.

Despite joining the par-for-play ranks, Thomas isn't letting on to any pressure.

“As cliché as that is,” Thomas said, “it’s still just another event. But … hopefully at the end of the week I’ll be getting money for how I’m playing instead of just, ‘good job.’”