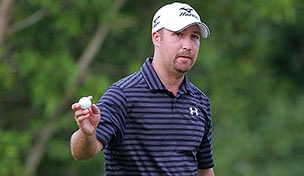 It must be nice to have a nine-hole stretch where your lone 'blemish' is a par.

That's a feeling that Chad Collins now knows, as the 34-year-old carded a 9-under 27 Friday en route to an 11-under 60 during the second round of the Web.com Tour's Utah Championship.

Beginning on the back nine at Willow Creek Country Club in Sandy, Utah, Collins opened with birdie and then made his lone par of his outward nine on the par-3 11th hole. Five straight birdies followed on holes 12-16, and the Indiana resident added an eagle on the par-5 17th. Another birdie on the 18th gave Collins a first-nine 27, tying the record for the lowest nine-hole score in Web.com Tour history.

From there, Collins kept his foot firmly on the gas pedal, recording birdies on two of his next three holes to reach 11 under after just 12 holes and entertain realistic thoughts of shooting golf's magic number. He was unable to make another birdie coming home, though, closing with six straight pars for an 11-under 60 that still was enough to break the existing course record by two shots.

'Obviously the lowest score I've ever shot for nine holes ... I just ran out of birdies,' said Collins, whose lowest score this year had been 67 entering Friday's round. '(Shooting) 59 is hard to do; there's not been very many of them. I was close, but not close enough.'

It was a remarkable round for a player who has largely struggled on the developmental circuit in 2013. Though he tied for third at the Mid-Atlantic Championship last month, Collins has missed the cut in eight of 13 starts this year on the Web.com Tour and currently sits 70th on the season-long money list. At 16-under 126 through 36 holes, he will now take a two-shot lead over Brian Prouty into the weekend in search of his third career Web.com Tour title.

Three players have previously shot a 59 on the Web.com Tour, most recently Jason Gore at the 2005 Cox Classic. Collins became the 19th player to shoot 60 in the circuit's history.