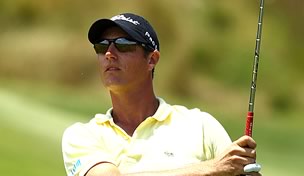 Nicolas Colsaerts made his 2012 European Tour debut with the round of his life, shooting a course record 9-under 64 on the Links at Fancourt to take a four-shot lead after the first round of the Volvo Golf Champions in South Africa.

“I think I shot 8 or 9 (under) in Indonesia somewhere, but the course is not as tough as this one,” the Belgian said after his round.

Video: Round 1 highlights from the Volvo Golf Champions

“I think the conditions of the course today, I'm not saying it's easier, but it's the only way you can shoot a low number like this,” Calsaerts said.

Colsaerts made birdie on nine of his final 11 holes and didn’t drop a shot. He also birdied all four par-3 holes on the day.

“I don't think I ever did (that before). That's something you don't really see that often on a tour card,” he said regarding his four 2s.

Padraig Harrington and Louis Oosthuizen are among four players trailing Colsaerts in joint fifth on 4 under. Harrington double bogeyed the par-5 18th. Colin Montgomerie is another shot behind, tied 11th, while Ernie Els, Ryder Cup captain Jose Maria Olazabal and Thomas Bjorn are on 2 under. Open champion Darren Clarke is 1 over par.

Charl Schwartzel continues to struggle after missing the cut last week as two-time defending champion of the Joburg Open. His 75 leaves him 11 off the lead and T-28 in the 35-player field.