Colsaerts off to hot start at Johnnie Walker 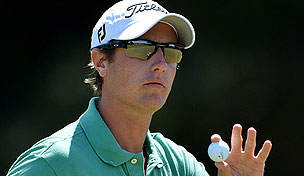 Nicolas Colsaerts needs a high finish this week at Gleneagles to earn an automatic spot on the European Ryder Cup team.

Well, after Round 1 of the Johnnie Walker Championship, the long-hitting Belgian is off to a promising start.

Colsaerts, who needs to either win or finish second to move inside the top 10 on the European points list, shot a 3-under 69 Thursday in windy conditions to sit two shots off the first-round lead.

Starting on the back nine, Colsaerts made four birdies in a five-hole stretch before making the turn, and is two shots back of Brett Rumford and Knut Borsheim on the PGA Centenary Course in Perthshire, Scotland, site of the 2014 Ryder Cup.

A high finish this week at Gleneagles would vault Colsaerts onto the Ryder Cup team and bounce Martin Kaymer out of the top 10. Even if Colsaerts doesn’t qualify on points, he seems likely – along with Englishman Ian Poulter – to be selected as one of the two captain’s picks.

The European team will be finalized Monday.