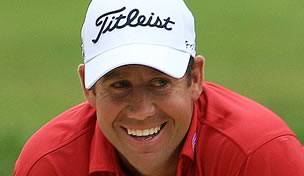 Compton, in the field for this week’s Frys.com Open, is a two-time heart transplant recipient. The award is presented “to a player who, through courage and perseverance, has overcome extraordinary adversity, such as personal tragedy or debilitating injury or illness, to make a significant and meaningful contribution to the game of golf.”

'Eric's story is a remarkable one in the fact that he has overcome extraordinary odds to not only survive, but to thrive, particularly in sports,' Finchem said.

Compton called it 'the best award I've ever received.'

'When you guys did call and let me know that I was awarded the Courage award, I actually walked around the block and had a moment to myself,' Compton said during his news conference with Finchem. 'I was very emotional about it, because I feel like this is what I worked basically my whole life ... to be acknowledged by the players and also by the board and to receive such a great award.'

The award will not be presented annually, but “from time to time,” according to Finchem. It includes a $25,000 donation to the charity of the winner's choice. Compton said the money would be split between the Cardiovascular Institute of Miami and the Arnold Palmer Medical Center Foundation.

Compton is competing in his third full season on Tour, having finished 99th in last season’s FedEx Cup points standings. He was diagnosed at age 9 with viral cardiomyopathy and had his first heart transplant three years later, in 1992. He had a heart attack in 2008 and required a second transplant.

'Through the help of family, doctors and friends, I have gone from being someone lying on his back in recovery to someone walking the fairways of the PGA Tour,' Compton said. 'Not only has playing on Tour been a dream of mine, but it has also served greatly in the healing process. It has given me something to work toward, but also something to hope for. I'm incredibly grateful for this award and blessed to have the opportunity to be playing on the PGA Tour.'