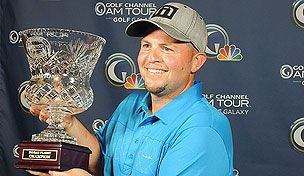 PONTE VEDRA BEACH, Fla. – From first to worst, that's Jason Conner's story in the Hogan Flight at the Am Tour National Championships, but it was hardly the only highlight.

Conner fired a final-round 80 on the difficult Dye Valley Course to win the Hogan Flight (8-11.9 handicap) by two strokes, during a week when he might have gotten a little divine inspiration.

Three years ago, in the same flight, Conner finished dead last in this championship. But this year, the story was an about-face. As the CFO of a large church in Oklahoma City, he's also married to one of the church's preachers, Amanda, who is also the daughter of the church's pastor.

Perhaps there was some extra praying going on this week for Conner, who caught a lucky break on the front nine, then rode it to victory. On the par-3 seventh, he thought he had hit in the water.

'But I didn't see a splash,' he said. 'When I went up there it was resting on a plank. I chipped it off the plank and made par.'

Conner, whose worst score all week was an 83, has never taken a lesson and had no explanation for his turnaround from two years ago when he finished last in the same flight in Palm Springs.

'I think the first round there I shot the temperature, 103,' he said with a laugh.

This time, he held it together, holding off Johnny Burt of Glen Carbon, Ill., who shot 77 on Friday to finish second two shots back, and Robert Simpkiss, four strokes back at 328.