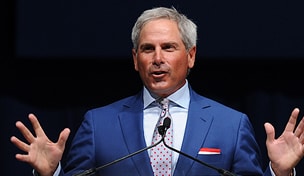 DUBLIN, Ohio – For the first time, the Presidents Cup Opening Ceremony was held off site on Wednesday, complete with both the U.S. and International teams, captains and a few thousand fans gathered at Columbus Commons.

Couples went straight to a hearts-and-minds campaign to woo the partisan crowd, pointing out OSU head football coach Urban Meyer is undefeated since arriving in Columbus, Ohio, and will “probably stay that way for a while.”

This week’s host Jack Nicklaus, however, elicited the night’s loudest ovation when he told the crowd, “It’s good to be home.”

The ceremony lasted about an hour and was followed by a Rascal Flatts concert.