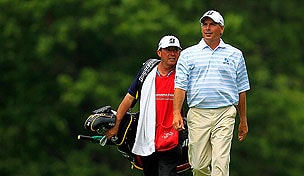 Fred Couples will have a chance to make his 30th career Northern Trust Open start, as he was offered an exemption into the Riviera event on Thursday.

Couples will tie Gene Littler with a 2012 appearance. He is a two-time winner and three-time runner up in the tournament. He finished T-7 there last year.

An illness, however, forced Couples to withdraw from the Phoenix Open this week. Golf Channel's Brian Hammons reports Couples' notoriously problematic back flared up in the Champions Tour opener in Hawaii.

Couples was among several exemptions announced, in addition to those already given to Jason Gore and Big Break alum Andy Walker.

Collegiate stars Patrick Cantlay and Jordan Spieth will make their Riviera debuts with exemptions for each. The PGA Tour start will be a good preview of this year's NCAA Championship, which will be held at Hogan's Alley.

Cantlay, the No. 1 ranked amateur in the world, shot a record 10-under-par 60 in the second round of the Travelers Championship last summer as part of a string of top-25 finishes on the PGA Tour.

Spieth, a freshman at the University of Texas, finished T-16 and T-32 in the HP Byron Nelson Championship the past two years.

The tournament also announced exemptions for Ryo Ishikawa, South Korean K.T. Kim, who is No. 30 in the Official World Golf Ranking, and Yuta Ikeda of Japan.