Cracked driver a blessing for McDowell 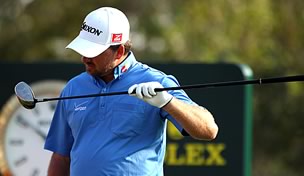 A cracked driver in the first round of the Abu Dhabi HSBC Championship may have cost Graeme McDowell a chance at victory, but the 2010 U.S. Open champion now believes retiring the driver that helped him win a major is a blessing.

“I am driving the ball better and I was driving it well in Abu Dhabi and Qatar, and I feel that I am hitting it long.  It’s flying better and very much under control and I have been ecstatic with the Cleveland,” McDowell said, according to the Irish Examiner.

The Ulsterman cracked the Callaway FT driver he used throughout 2010. He replaced it with the Cleveland Classic, a new driver with style harkening back to the days of persimmon-wood drivers.

“I’m probably getting about another 5 yards or so and hopefully by the match play, I can get about an additional 10 yards overall,” he said.

Both drivers returned home with McDowell to Orlando, Fla., as he prepares to go to Arizona for the Accenture Match Play.

“I am a semi-sentimental guy when it comes to equipment so I will be framing up the set of clubs I won the U.S. Open with along with the driver, hybrids and irons,” he said.

He's not parting with the putter though. It's still in his bag.