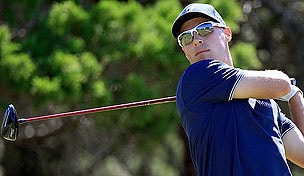 Ben Crane does not have a torn labrum, after all.

According to manager Tommy Limbaugh, the McGladrey Classic winner has seen other doctors who do not believe his left hip labrum is torn or will require surgery.

Crane announced on Dec. 5 that his labrum was torn and would require off-season surgery and a three-month recovery period, which he would pursue next autumn.

After defeating Webb Simpson for the Sea Island title, Crane said his hip condition nearly kept him out of the event.

'Oddly enough, on Wednesday afternoon, I told my trainer, I've been having some issues with my left hip, and I said 'I just don't think I should play this week. I feel like I've got something going on with my labrum.' And so I was about five minutes away from withdrawing from the tournament on Wednesday,' Crane said in October.