Creamer in the hunt, and in good spirits 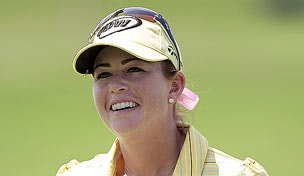 COLORADO SPRINGS, Colo. – Paula Creamer’s sense of humor was working just fine when she finished up her weather-suspended second round early Saturday morning at the U.S. Women’s Open.

“You know it’s early when I don’t have makeup on,” Creamer cracked.

Finishing up a 1-under-par 70, Creamer put herself in solid position in her bid to win the championship in back-to-back years. She hit 17 greens in regulation in the second round and sits at even-par 142 halfway through.

“I know there are some things I need to do better, but I have a lot of confidence,' Creamer said. 'I feel really positive. Like I’ve been saying, I want that trophy back. I am trying the ultimate, the hardest I can.”

Creamer was paired with world No. 1 Yani Tseng in the first two rounds. Tseng is 4-over through 36 holes.

“Yani is by far one of the longest players out on tour, and I had to try not to kill every shot I had because there was no point,” Creamer said.

At the third hole in the first round, Tseng hit her drive 57 yards past Creamer. On other holes, however, Creamer split narrow fairways with her driver when Tseng powered down with rescue clubs. Through two rounds, Creamer has hit seven more fairways and five more greens in regulation than Tseng.