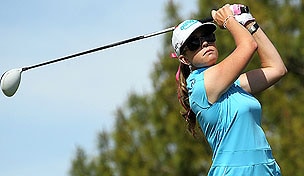 It wasn’t too long ago that Paula Creamer was billed as the Next Big Thing in women’s golf, the teenage wunderkind who outdueled older, more polished peers. In 2005, she won the Sybase Classic and, at the time, became the youngest winner in LPGA history, at 18 years and 9 months.

Incredibly, that mark has since been eclipsed – twice – by potentially game-changing talents: Lexi Thompson, who was 16 when she won last year’s Navistar Classic; and now by 15-year-old Lydia Ko, who torched the field Sunday during an eye-opening victory at the Canadian Women’s Open.

“I think it’s incredible,” Creamer told GTC on Tuesday. “And not for her to just win, but to really win – strong – and deal with everything that came with it. Records are going to be broken all the time, but that’s pretty substantial right there.”

Ko’s triumph reignites a lively debate, however: Is having a 15-year-old amateur dominate one of the strongest fields of the year beneficial for the LPGA, or is it more an indictment of the tour?

Said Creamer, “I think it’s good, and I think we need to embrace it. I think, too, that she needs to do what she wants to do, and it’ll be interesting to see the path she chooses. But that little stretch she had (on Sunday), holding it all together . . . at 26 years old it’s hard, let alone at 15.”

Indeed, there is no diminishing Ko’s star-making performance. The South Korean-born New Zealander, who also won this year’s U.S. Women’s Amateur, closed with a 5-under 67, which included a run of five birdies in a six-hole stretch on the back nine, to win by three shots over Inbee Park.

A nine-time winner on the LPGA, Creamer tied for 60th in Canada as she continues to grapple with a swing change under coach David Whelan.

“There’s not one word to describe it,” Creamer said of her 2012 campaign, during which she’s posted four top-10s and dropped to 18th in the Rolex Rankings. “I’ve gone through a lot, whether it was the passing of my grandfather or just trying to figure things out.

“I realize the swing changes I’m making are difficult, but I never realized it’d be this hard. Hopefully I’ll look back and say this was the greatest thing I’ve ever done. But right now, in the middle of it, it’s the hardest and most frustrating thing I’ve ever had to do. I want it so bad, and the passion for that will never change.”

A victory at the upcoming Ricoh Women’s British Open certainly could help salvage a sub-par season. Having already played a practice round at Royal Liverpool, Creamer likes her chances on a course that demands accuracy off the tee and a piercing ball flight in the wind.

Said Creamer, “If there’s a British Open golf course set up for me, it’s that one.”