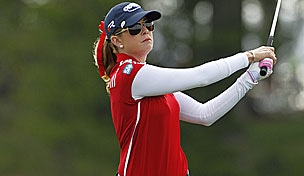 SOUTHAMPTON, N.Y. – Paula Creamer probed the mind of the man who devised these challenging greens at Sebonack Golf Club during her practice round Tuesday for the U.S. Women’s Open.

Creamer played alongside Tom Doak, who co-designed Sebonack with Jack Nicklaus and is credited with the brunt of the green designs and their maddening undulations.

When Doak first inquired whether he could follow Creamer around, Creamer didn’t believe it.

“I asked my dad,`Is it a joke? Is someone playing a trick on me?'” Creamer said.

Creamer, who won the U.S. Women’s Open in 2010 on Oakmont’s treacherous greens, relished the chance to grill Doak on nuances of his designs.

“Why would you do this to us?” Creamer playfully asked Doak of the toughest greens. “I didn’t give him too much grief about it, but he laughed.”

Creamer would like the last laugh come Sunday evening.