Darkness suspends WMPO for second day in a row 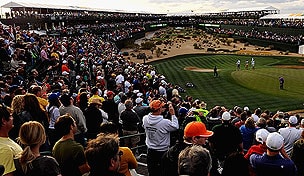 Getty Images
Bubba Watson of the United States hits his approach shot on the fifth hole during the third round of the 2015 Masters Tournament at Augusta National Golf Club on April 11, 2015 in Augusta, Georgia. (Photo by David Cannon/Getty Images)  -

SCOTTSDALE, Ariz. – For the second day in a row, players were unable to complete their rounds at the Waste Management Phoenix Open before nightfall.

Darkness suspended Round 2 at 6:05 p.m local time Friday, leaving four players on the course. They will resume their second rounds Saturday morning at 7:45 a.m.

Jason Bohn and Michael Putnam were both 1 under with two holes to play in their second rounds. Joe Ogilvie was even par with one hole to complete in his round, and Spencer Levin was 5 under with two to play.

The current cut line is 1 under, so those last few holes could mean the difference between playing on or going home tomorrow for all four guys. On Friday night, 62 players were at 1 under or better.