Davis hopes McIlroy runs away with the Open 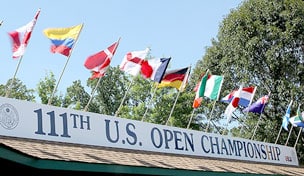 BETHESDA, Md. – Thanks to Rory McIlroy, Friday was a bad day for a few of the sacred cows of the USGA’s national championship.

McIlroy became the first player in U.S. Open history to reach 13 under par at any point in the championship. He became the fifth man in 111 U.S. Opens to reach double digits under par – the fourth in the last 12 Opens.

If the USGA lived up to its country club legend, then executive director Mike Davis should be sitting in a lair, pounding his fist on the desk and yelling at his subordinates to make the Ulsterman pay for daring to thump his course.

Instead, Davis sat back in his chair inside the rules trailer at Congressional and was enjoying the action on 20 different camera angles beamed to a big screen TV. He was genuinely happy.

“I think what Rory did the last two days is fantastic,” Davis said Friday. “One of the things we always look at is that we want it to be a stern test but we want to make sure every part of it rewards good shots. In some ways, to be honest, when I see it, I love it, because I know he was just not missing shots. It rewarded him. In that sense, it’s great.

“When you look at [McIlroy's] score and then look at the other 155 players, you say, ‘Here’s somebody that just played flat out great.’ It was like Tiger in 2000 at Pebble Beach,” he said.

In fact, Davis was hoping the 22 year old could have finished with a par instead of double bogey. He said, “Part of me thought it was too bad when he double bogeyed the last hole. To go 35 holes without a bogey, then finish how he did, that was too bad.”

There are no plans to exact revenge on McIlroy.

“Contrary to what people think, we don’t mess around with it.”

He added, “With the greens at these speeds, there are only so many places we can put the hole locations. There’s really not much we can do, even if we wanted to.”

Davis points to a piece of paper on a clipboard. It’s a spreadsheet with 18 lines – one for each hole – and a ton of boxes. Laid out in the boxes are the pin placements for all four championship rounds and even spots for a hypothetical playoff. They’re already set in stone and won’t change.

The five pin locations were selected months ago during a Davis visit to Congressional. He spied five possible spots for the holes but never assigns a day to them. The week before, in his final walk through, Davis sets the rotation for each hole. No magic, no revisionism.

On some of the greens, Davis got his highly-publicized wish of getting to 14 on the Stimpmeter. They settled into the mid-13s by the end of the day.

“I’m happy with how the course is playing. I wish the greens were firmer, only because I think it creates a more interesting event,” he said.

There will be no water applied overnight Friday at Congressional and the rough will be cut. In this Open, Davis can run the Subair system with confidence, knowing he won’t dry out the greens too much.

“Last year at Pebble in that last round – if I had it to do over again given the weather conditions – I would have put more water on the greens,” Davis said.

The USGA is not trying to embarrass players, they’re trying to identify them, Davis said with a modern spin.

“I actually get concerned sometimes when it’s overly tough,” he said. “Yes, it’s a great test, but you just don’t want to see pars, bogeys, bogeys, bogeys. That’s why you saw all of the par 5s reachable in two shots today. We could’ve made them harder, but we like those risk-reward shots.”

In four of the last 12 Opens, a player has identified himself as particularly outstanding – even if their status under par is fleeting. Only Tiger Woods has finished an Open double digits under par. That was not on Mike Davis’ watch, but since 2006, he concedes that there is a chance his way of doing things at the national championship has created the possibility of better scoring.

“I would argue there’s room for more shot making skills. We’re playing wider U.S. Open courses than we used – they were so narrow before. So if you’re playing well, there’s a chance to score very well.”

That’s what McIlroy is doing right now and, if he is to win the U.S. Open, then Mike Davis wants to see a blowout.

“In a way, I would rather Rory just run away with this thing versus him win by four. If he’s only going to win by four, then I want him to fall back a little closer.”

That said – a common qualifier in delicate situations like the reputation of a major championship – it can be safe to say that this will not be a regular occurrence.

“Personally, I don’t really care about scores. I care much more about how a course was playing,” he said. “But, there’s a tradition – a mystique and a trademark – to the U.S. Open. If you started seeing double digits under par win every year, then people would start saying, ‘What has changed?’”