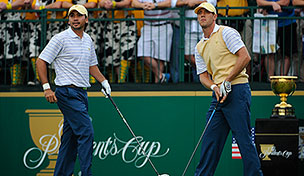 DUBLIN, Ohio – Jason Day and Graham DeLaet have turned into a surprise power pairing for International captain Nick Price. For the benefit of DeLaet, a Canadian who played hockey as a junior, the duo has become a solid first line for the Rest of the World squad.

In fact, Day – who lives in Columbus, Ohio, and is a Blue Jackets fan – planned to attend Friday’s opening night game with the Calgary Flames but this week’s weather delays at the Presidents Cup changed that plan.

The Presidents Cup was represented at the game, however. Jack Nicklaus, this week’s host, dropped the ceremonial first puck at Nationwide Arena.